Of course it would take some years, a lot of gumption and no doubt many a sleepless night to get Mrs Brown’s Boys to the TV screens and to achieve the worldwide success that it enjoys today. There is little doubt that the caustic-tongued Irish widow has “made it” … and this week it was Brisbane’s turn to experience first-hand the razor sharp wit of the dysfunctional family Brown and their cardigan-wearing, hanky-clutching Mammy in Mrs Brown Rides Again.

I’ve heard fellow cast-members (including the star’s actual wife, Jennifer Gibney) talk of how they work in a state of constant “fear” on stage of his “rabbit trap-fast wit” and his penchant for throwing in ad-lib lines and actions. Regular viewers of his TV series will remember countless outrageous moments when even the cast can’t maintain a straight face, let alone the crew or the live studio audience. Mrs Brown’s devotees were not to be disappointed when, in their thousands this past weekend, they streamed into the vast Brisbane Entertainment Centre to witness this comedy phenomena live on stage.

From the moment the lights dim and the dumpy housewife with a laugh like a machine gun first appears to the curtain call and standing ovation, some two and a half hours later, one just can’t stop laughing. Many of the gags and storylines we can now recognise from the various TV episodes but that somehow doesn’t detract from their magic when presented live. I heard Sinatra sing on the radio and on recordings for decades … but nothing prepared me for actually seeing him live. 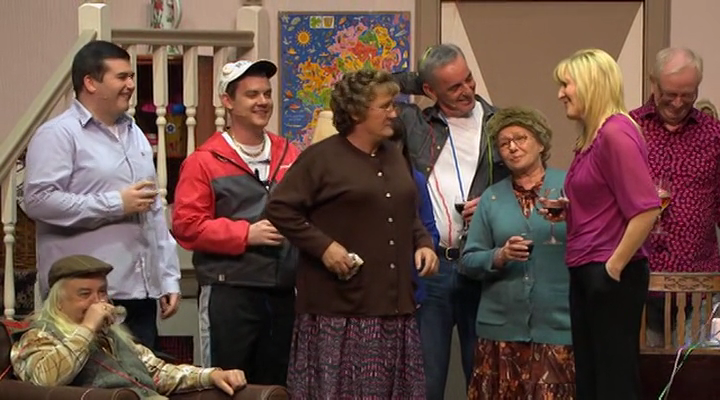 The ad-libs came fast and furious – poor Rory Cowan (one of O’Carroll’s longest associates) could barely speak when he sat down with his dear ole mammy for a “serious” chat” … and she interjected with: “First, I’ve got a bum joke for you!” … And proceeded with telling the joke! Priceless! Cowan was in tears with laughter – O’Carroll sat there looking as innocent as a babe and the ten-thousand strong crowd just lapped it up. “I remember writing this scene” he innocently quipped as his co-star tried desperately to compose himself sufficiently to speak … “and it didn’t go for this long!” More laughter.

O’Caroll’s real-life sister Eilish O’Carroll, plays the winsome neighbour, Winnie McGoogen and, like the other much-loved members of his immediate family, he appears to take great delight in throwing her concentration on stage – much to the amusement of the hugely adoring audience. Then there’s poor Gary Hollywood who (at the performance I saw) copped no fewer than four solid whacks around the ears with a folded up tea towel in his ever-suffering role of Dino (Rory’s partner).

Brendan O’Carroll’s is an inspiring story – the young waiter from Finglas, Ireland who found he had a gift for making people laugh. Who grew up in tough times –and somehow managed to avoid the perils that often befall bored schoolboys trapped in harsh housing estates. However he and his ten siblings were brought up by a tough Mammy with a heart of solid gold and who was no doubt, the principal inspiration for his on-screen persona.

In his programme introduction, O’Carroll pays homage to one of his (and my) greatest theatrical heroes, Dame Edna Everage (AKA Barry Humphries). In my humble blog, I pay homage to Mr O’Carroll: for following a dream with all the determination of a starving bull-mastiff with a dropped sausage – for not listening to the “nay-sayers” and for believing in his “inner-mammy” and bringing his beautiful sense of lunacy to the World. It’s wonderfully entertaining; it’s uplifting … it’s feckin hilarious!