This weekend saw the Gold Coast Little Theatre’s annual Short Play Season staged at their intimate Southport venue. Interestingly, many of the works were locally written and then directed by the playwright.

What a great opportunity this is for budding writers to workshop and stage their plays in a “proper theatre” … just a shame the audience didn’t seem to be as supportive as perhaps they might have been. (I counted fewer than 40 people in the house on Opening Night!)

Libby Bancroft and Kellie Eatcok have both been busy ladies with two plays each on the bill. Ms Bancroft’s The Price of Fame was a clever and slightly disturbing look into the way social media may influence our lives in the decades to come and Ms Eatock’s Bumpy Ride amusingly reminded me of why I like to slip on my eye-mask and headphones the moment I take my seat on an international flight!

Other works included Two Men on a Park Bench by Rob Doran, Richard Lamont and Greg Stone (also the director) and The Locker Room, written & directed by Gillian Crow. The afore-mentioned Libby Bancroft also offered us a look into exercises classes entitled Fitter! Faster! … Fatter! And Ms Eatock gave us Is This Considered Bad Luck?

However I will save my greatest accolade for local theatre icon Joel Beskin who had us roaring with his delightful portrayal of James the devoted butler in Laurie Wylie’s classic play, Dinner for One (directed by Claudine Anderson).

I applaud the GCLT for their maintaining the Short Play Season … and I “boo” the alleged theatre devotees of the Gold Coast for not supporting this brief run. You not only gave up a good night out but the chance of being there at the birth of something potentially quite wonderful.

By Glenn T
Posted by Unknown at 2:49 pm No comments:

Shut Your Eyes & Think of England 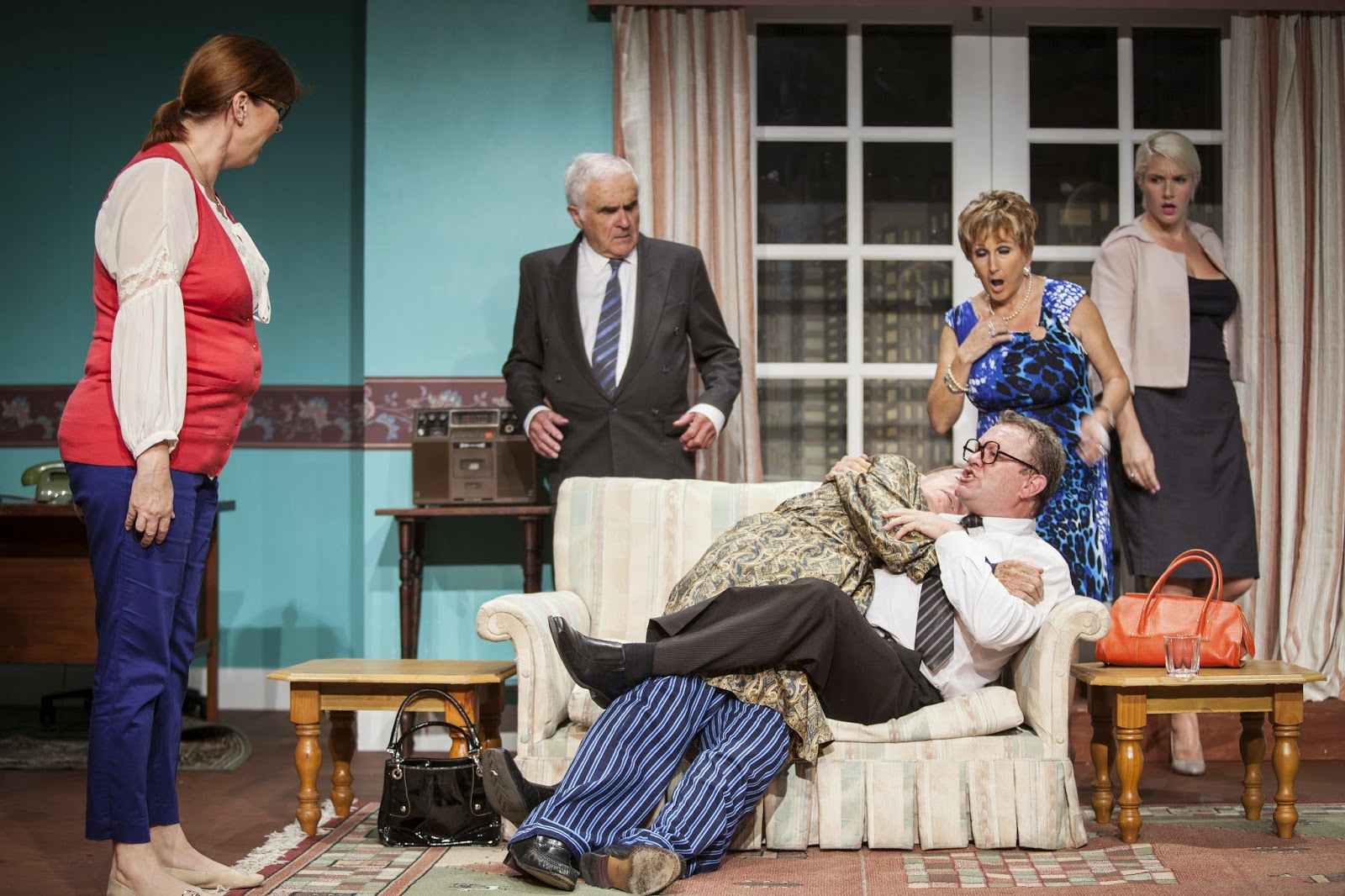 It’s a tried and tested formula and really, rather a simple plot.   A British aristocrat conspires to cheat on his wife, defraud his own company and rip off a squillionaire Arab Sheik and all before 9 o’clock on a Saturday morning! In the process, he takes ill, his accountant becomes him, his elicit squeeze becomes the accountant’s wife and then, even though the accountant (now the businessman) technically had to sack himself, he plays camp to put them off the scent. The old man’s illness is misinterpreted as a gay lover, Sir Fredrick isn’t quite as honourable as his business cards might have one believe and the solicitor is mistaken for a Doctor! Meanwhile the sick and hallucinating toff’s real wife is stuck on the accountant and the accountant’s real wife is terribly confused … that is until she mysteriously falls in love with the Sheik.

Oh God … it’s a travesty … and now I’ve confused myself! And I was going so well.

The reality is, the British farce is the original “situation comedy” - a classic theatrical art form that is, if I’m honest, probably a bit dated but still manages to raise more than a few laughs. It’s almost so silly, one can’t help but laugh and I suppose that, in a nutshell, is the point. 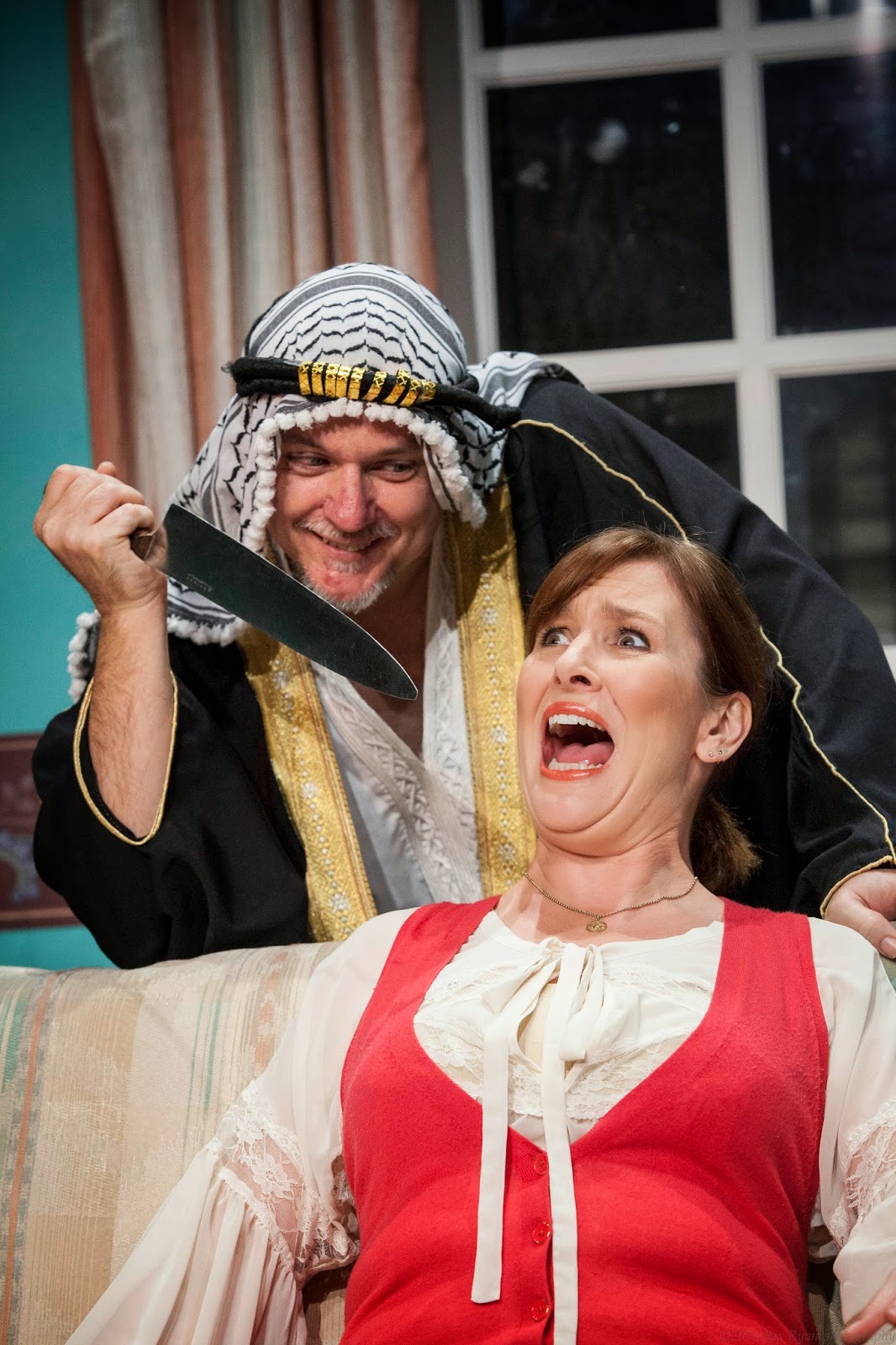 Shut Your Eyes & Think of England is, on the whole, well cast and effectively played. David Edwards and Nicola den Braber play the clichéd “boring accountant” Arthur Pullen and his equally as uninteresting wife Joyce. These two work very hard in this physical production and really do make you laugh. Robert Fallon plays the philandering knight, Sir Justin Holbrook, with charming aplomb and likewise, Amanda-Lee Weatherby fits very comfortably into the “night girl” come personal assistant with a delightfully cheeky edge. Whilst I’m on the subject, I should mention Brian Wilson’s lovely performance in the role of Lawyer Mr. Rubenstein … Yes, he does look like a doctor!

The set is more than adequate and the plethora of practicable doors required to stage such a farce are there and swinging constantly. Would I have designed it differently? Yes. Does that matter? No. While I sometimes thought the stage blocking could have been better paced, the overall direction is quite ok. My only observation was that there seemed to be a few moments where people stood idle watching the action and appeared to be simply awaiting their own next line. Perhaps they need something more to do in order to keep up the energy and pace.

However, that said, the audience certainly seemed to enjoy this silly insight into the lives of some rather strange characters on an unfortunate London morning. And if the audience is laughing, then clearly that’s a job well done.

Posted by Unknown at 1:54 pm No comments: