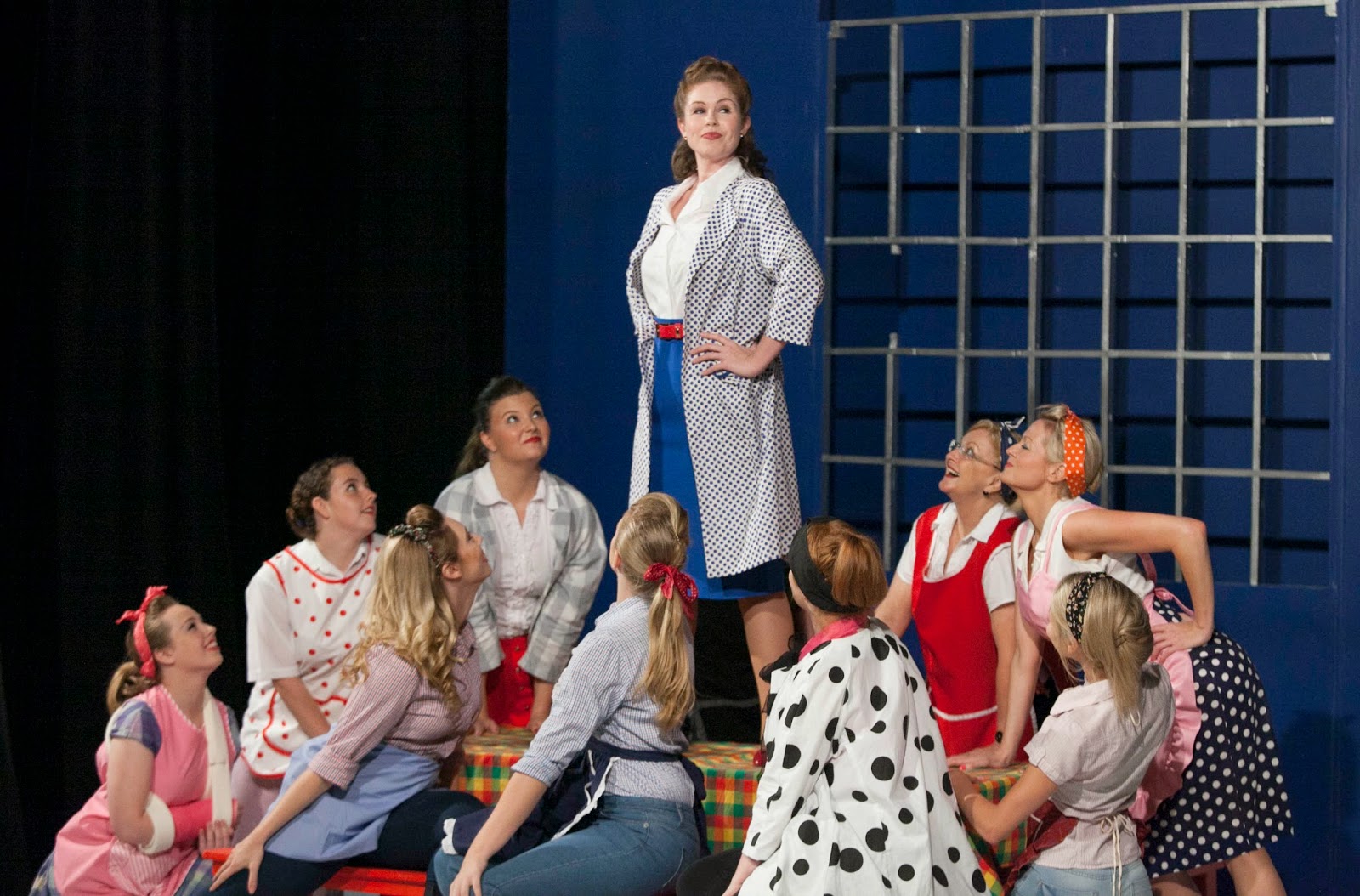 Well as much as it pains me to type the word “pyjama” with an “a” (the American spelling) I have to say my annoyance ends there. Last night the Gold Coast Little Theatre opened it’s musical production for 2014 and I think it will be a hit with audiences.

The Pajama Game first opened on Broadway in 1954 and ran for well over 1000 performances – a day when, I suppose an extra 7½ cents an hour really would have made a difference to an employee’s pay packet. The story made it’s mark internationally in 1957 when Warner Bros released the movie version of the same name starring the ever-pure Doris Day in the lead role of Babe, (a name that since 1995 will forevermore, sadly, be associated with a singing pig!)

It’s a sweet and simple story (based on the novel 7½ Cents by Richard Bissell) of a burgeoning romance and a union dispute both brewing in a pyjama factory in a time of Dictaphones, big petty coats and corny company picnics! The musical (originally choreographed by the legendary Bob Fosse) is a celebration of love, understanding and all things good from that era.

In this production, Director Stuart Lumsden has worked hard to fit the action and varied
locations into a static set. The movement of numerous well-designed set pieces helps transport us from workroom to office to kitchen. The colour palette used in the lovely set finishing and costuming is really attractive and clearly well considered.

The charming Louise Harris carries the lead role with all the saccharine delight of her famous predecessors: her voice is simply stunning and, like her character, her performance is strong. Chris Catherwood plays the firm but fair superintendent, Mr Sorokin with equal aplomb. However, as with many such stories, it’s the support characters that are given the best opportunities to shine. In this case, Becky Morgan and Leigh Harrison step up to the plate quite beautifully as Gladys the ditsy secretary and Hines, the ever-jealous, knife-throwing workshop timekeeper. Ms Morgan’s accent is wonderful and her “tragic drunk” scene in act II is an absolute joy.

The show is performed entirely to quality backing tracks. While this offers a nice, big orchestral sound not possible in a small theatre space, it is not necessarily easy on the performers and does have its drawbacks. It’s an age-old problem, I know. Maybe the mic plot needs to be re-considered so that performers who have lines in a particular song are wearing a mic, and those who do not, are not! It’s just a little sad that some vocals are being lost under the amplified music. As one patron commented: Why can I hear the typewriter but not half of the lines?” Technically there were a few minor issues on Opening Night but I have no doubt they will be arrested before the next performance. (Note to follow spot operators: Please aim before powering up your lamp!)

This show is full of colour and movement and some lovely, recognisable songs: it’s bright, fun and entertaining … and now that the tram is running, the fences are down and after-hours parking is free, is well worth the trip into Southport.

By the way – a bit of Broadway trivia. For all of those “chorus girls” out there dreaming of being up front one day, it was the original Pajama Game that gave rise to one of the brightest stars in the world of entertainment today. She was “just in the chorus” but when Carol Haney (in the comic support role of Gladys) broke her ankle, the long-legged dancer and potential showbiz legend, was asked to step out of the chorus and go on in Haney’s place. She played the role of Gladys for several months and was subsequently spotted by producer Hal Wallis who instantly offered her a contract at Paramount Pictures in Hollywood. Carol Haney never enjoyed the success of that chorus girl – known and admired the world-over today as Shirley MacLaine.
Posted by Unknown at 1:38 pm